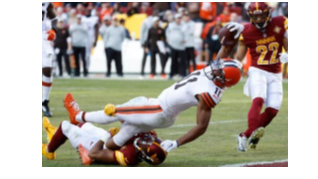 LANDOVER, Md. — The Washington Commanders entered Sunday’s game against the Cleveland Browns in control of their own playoff destiny. Defeat Cleveland and Dallas next week, the No. 7 seed in the NFC was theirs.

It was the Browns that looked like they were the team fighting for a postseason berth on Sunday, however. After an uninspiring effort on both sides in the first half, Cleveland took control with three straight touchdown drives in the third quarter and then cruised to a 24-10 victory over Washington, leaving the Commanders in need of significant help to remain alive in the postseason race.

Vibes at FedEx Field were off on the home side from the very beginning of Sunday’s game. Quarterback Carson Wentz — who coach Ron Rivera turned back to this week, moving Taylor Heinicke to the bench — short-hopped his first pass of the day to a wide-open Jonathan Williams. His very next attempt was picked off by Browns cornerback Denzel Ward.

The fans certainly let Wentz hear their frustrations, as “Heinicke! Heinicke!” chants broke out following the interception. Wentz had yet to complete a pass before Washington’s supporters were calling for his removal.

“It’s part of football. I get it,” Wentz said on the chants. “I’ve seen a lot in my seven years and I’ve experienced a lot. I get it. I didn’t have my best day today, and I wish it would’ve [gone] differently. I feel like I let some of my teammates down there early in the game, put us in a hole a little bit. But, that’s part of football.”

Chase Young, Kendall Fuller and Jeremy Reaves were among the multiple Commanders players who showed support for Wentz after the game. They acknowledged hearing those chants were tough, but also understand the fans’ frustration as well.

“We understand, they get frustrated just as much as we do,” Reaves said. “But at the end of the day, we trust 11 just as much as we trust 4. That’s our guy. … They could have easily been chanting ’31’ when I was out there for Kam [Curl]. We all trust each other and we’re all going to have each other’s backs.”

The Commanders couldn’t do much right early on, but Cleveland initially failed to capitalize on Washington’s miscues. The teams traded drives that ended with a turnover on downs before Wentz threw his second interception of the half on a deep shot intended for Curtis Samuel.

Despite a nightmare start, Washington eventually found an offensive rhythm on its final possession of the first half. Behind a run-heavy attack, the Commanders orchestrated a 21-play, 96-yard drive that culminated with a Wentz one-yard touchdown run. Washington’s scoring drive took over 11 minutes off the clock and allowed them to enter the halftime break with a 7-3 lead despite playing poorly overall.

It was a different story for both sides after the break. Cleveland’s offense found like in the third quarter, as Deshaun Watson threw a touchdown pass on three straight drives. Washington’s secondary, without top cornerback Benjamin St-Juste and do-it-all safety Kam Curl, had no answer for Amari Cooper, who finished Sunday’s game with over 100 yards and two touchdowns.

While Cleveland’s offense began to click, the Commanders’ unit had no counter. Washington scored just three points over the final 30 minutes and never truly threatened to find the end zone during that span. Wentz didn’t reach 100 yards passing until the final period and finished with a measly 143 yards, zero touchdowns and three interceptions.

Rivera hoped turning back to Wentz would give the Commanders’ offense “a spark.” Instead, the decision helped burn out Washington’s playoff chances.

“What you want to do is take care of your business,” Rivera said. “You want to win football games when you have a chance to and when they’re important. And we didn’t do that.”

Just four weeks ago, the Commanders were 7-4 and rolling. Even after going 0-3-1 in their past four contests, Washington had an excellent opportunity on Sunday to prove their worth as a playoff-caliber team. Instead, the Burgundy and Gold were beaten at home by a Browns team that had nothing to play for other than pride.

That frustration of letting an excellent opportunity slip away was plenty evident in the locker room.

“We were in position to help ourselves out and we just didn’t get the job done. It’s frustrating,” Reaves said. “It’s tough. You never want to be in that situation. You always want to control your own destiny. When you have the opportunity to do that, when you come up short … it’s tough.”

Dating back to the end of last year, Rivera made it clear his goal was for the franchise to take a leap in 2022, his third year at the helm. With one week remaining in the regular season, Washington has as many wins (seven) as they finished with in both 2020 and 2021.

Essentially, the club is in the same place in the NFL’s hierarchy as it has been since Rivera’s first year.

A month ago, the Commanders looked poised to make that Year 3 jump Rivera so badly wanted. What transpired on Sunday against Cleveland shows just how far away the Commanders still are from being that team the head coach hoped they could be.