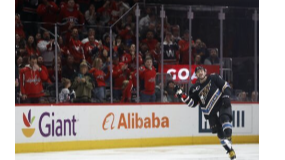 Alexander Ovechkin awarded NHL First Star of the Month for December
The accolades just keep piling on and on for the Great 8. Alex Ovechkin has been named the... More

The accolades just keep piling on and on for the Great 8. Alex Ovechkin has been named the NHL First Star of the Month for his remarkable play in December.

Heading into the final month of 2022, the Washington Capitals had a sub.-500 record and were outside the playoff picture. December was an electric month for the Capitals, who finished with an 11-2-2 record. Most of their success was largely due to Ovechkin, who notched a total of 22 points, netting 13 goals and dishing out 9 assists.

Outside, of his impressive numbers for December, it only seemed right to award Ovechkin with the First Star after an unforgettable milestone he achieved on Dec. 23rd against the Winnipeg Jets.

In front of his family and a packed Capital One Arena, Ovechkin tallied the first goal of the game in the first period to tie Gordie Howe with career score No. 801. As if tying Howe was not enough of an achievement, Ovechkin went on to score an exceptional no-look, empty-net goal in the third period to surpass Howe for second on the all-time goal-scoring list with No. 802.

Ovechkin now stands in second place with a total of 806 goals. He is eyeing the No. 1 spot held by Wayne Gretzky with 894.

To add to Ovechkin’s unforgettable month of December, he recorded not one, but two hat tricks. The first and most memorable one came on Dec. 13th against the Chicago Blackhawks, where he secured the 800th goal of his career as hats came pouring down on the United Center ice.

Then to end what seemed like a dream month for Ovechkin, he notched another hat trick against the Montreal Canadians before ringing in the new year. Ovechkin tallied his 30th career hat trick, in what was a dominant 9-2 win over Montreal at Capital One Arena.